We took a little time out from vacationing last night to watch the debate. There is no television in our cottage, but there is a TV/game room available to guests, so we watched there. A couple of thoughts came to mind while watching . . . 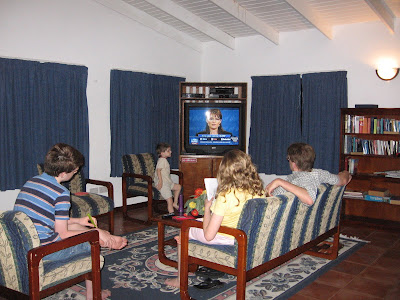 Considering that Palin surpassed most people's expectations of her in this debate ("Can we go back to talking about Afghanistan for a moment?"), will the mainstream media now declare her the winner in the same way that many declared Obama the effective winner against McCain because he had simply managed to hold his own and look presidential?

And when, when, when is someone going to challenge Obama or Biden on all that middle-class tax cut nonsense? Neither McCain nor Palin has yet done so to my satisfaction. I keep hearing how bad the Bush years have been for the middle class. Yet it was the Bush Working Families Tax Relief Act of 2004 that has saved our you-know-what's the last few years by extending the $1000 child tax credit. Obama says he is not going to raise taxes on the middle class. But that child tax credit is due to expire in 2010. Would a President Obama renew it? Or would he let it expire and manage to say he didn't raise taxes because he didn't sign a tax increase?

Update on the last 24 hours: we've had a few bumps in the road. Evan came down with a cold and was up a lot last night. Nevertheless, he awoke in better spirits and we decided to proceed with our plan of taking our rented Jeep to the north side of the island for some sightseeing. It is important to note here that Grenadians drive on the left, very fast, along twisty-turny steep mountainside roads. Phil and I took the Jeep out so that he could practice his driving yesterday, and he is getting the hang of it, but I have to say today was a bit of a tumultuous ride. About 30 minutes into our trip Evan became carsick (I'll let you fill in the rest). So we turned around and drove back home. By the time we got the backseat sitters (that would be me, Caitlin and Evan) and the car cleaned up (thanks to help from our wonderful maid, Cecilia), we had all lost our passion for an island expedition today. So instead we went into St. Georges for lunch at a local bakery and pizzeria that also serves gelato. Not exactly the birthday we had in mind for Trevor, but he is handling things maturely in spite of no presents and no cake. Getting old is rough, isn't it, honey?

My family is on the beach and the sun is going down. I'm outta here for now.