In two weeks Phillip will play his last service at Trinity. Our stay among the people there has been short, but the love has been tremendous. We are sad to leave new friends so soon but thankful for the time we had in their midst. They were exactly what we needed at exactly the time we needed them and we hope and pray they feel the same about us. I did not go to church prepared with my good recorder today, so these were taken with my cell phone. The quality may not be the best, but the memories are priceless. To the people of Trinity: thank you for everything.


"We Will Tell the Next Generation" (Psalm 78) from Cheryl on Vimeo.

"Let Children Hear the Mighty Deeds" from Cheryl on Vimeo.
Posted by Cheryl at 2:08 PM No comments: Links to this post 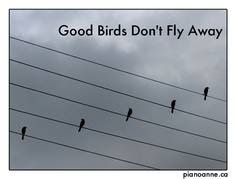 It was linked on one of the music pages I follow, with the question, "What acronyms did you use to remember the lines and spaces?" Here are the ones my first piano teacher taught me and that I still use with my students:

Over the years I have come across many others. One popular alternative for the treble clef lines is "Every Good Boy Deserves Fudge." I have also heard "Good Boys Deserve Fudge Always" for the bass clef lines. I think if you are going to use one of those you had better not use the other one--they are too similar and easily confused. For the bass clef spaces I have also heard "All Cows Eat Grass." If you took music lessons growing up, what mnemonics did you use? Feel free to leave your favorite in the comments.
Posted by Cheryl at 5:09 PM 4 comments: Links to this post

This Modern World in Which We Live

This just struck me as funny, and reflective of a world that has exploded with allergies and sensitivities. Yesterday Evan decided he wanted to make scrambled eggs according to the recipe in the Dr. Seuss book Scrambled Eggs Super. That recipe includes things like ginger, horseradish, nuts, and I can't remember what else. I prevailed upon Evan to make his scrambled eggs the normal way, suggesting that if he really wanted to add something, he could toss in a little cheese. So he took my advice, and his eggs were quite palatable. He was proud of the outcome and decided he would share his recipe with the piano students later in the day. "I bet they will like it," he mused, but then added, "unless they're lactose intolerant." I can't remember giving any thought to such things when I was nine years old!

Posted by Cheryl at 6:52 AM No comments: Links to this post

Wow, almost two weeks without a post! There's a reason for that. It's been an extremely eventful couple of weeks, full of many twists and turns. I will spare you the details and get right to the part that matters: our family is soon to embark on a new adventure, one about which we are more excited than we can say.

It was about twenty years ago, in 1993, that we came to Illinois. At the time I only had one baby, a happy, healthy 10-month old named Trevor. Phillip was working full-time as a college music professor when Trinity Lutheran in Peoria saw something in him and asked him to be their cantor. After much thought and prayer, he said yes, and I decided I'd better go along to keep him out of trouble. ;-) Several things made it very difficult for us to leave Texas, not the least of which was my father's declining health (he died in 1994 of lung cancer). But we believed that God was calling Phillip to this work. So we said goodbye to family and friends as well as to our home state and headed north.

About 6-1/2 years later Phillip heard another call, this time to a church in the Chicago suburbs. By this time we had a cute, curly-headed little carrot-top named Caitlin. We had also in the intervening years discovered something called homeschooling. So this time we packed up not just a house but also a school. For the last fourteen years both operations have been humming along quite nicely here in Chicagoland. About four years in, our number increased as we were joined by a happenin' dude named Evan. Then last year we had another major change as Phillip moved his office, and we moved our church membership, to Chicago's south side. We will always be grateful for the opportunity to know and love the people of Trinity (yes, another Trinity!) Lutheran in Tinley Park and for all the love they have shown to us. Our lives have been enriched by our time with them.

It is clear to us, however, that God is again calling. And this time, twenty years after we moved north, He is calling us back to our roots, not to Texas, but to what our Southern kin might call a "kissing cousin." And we believe without reservation that it's where He wants us right now. So in the next few months we will be writing the final chapter of our Illinois story and beginning a new one in Oklahoma, at Immanuel Lutheran in Broken Arrow. We are looking forward to being closer to most of our family and to providing a warmer climate for my elderly mother. But more important, we are anticipating the possibilities for Phillip to share the Gospel through music that we are convinced await him at Immanuel. In a future post maybe I'll share a bit more about those. In the meantime, your prayers are appreciated for the dear ones we are leaving behind and for the ones we are looking forward to knowing better in the years to come.

This Is My Life 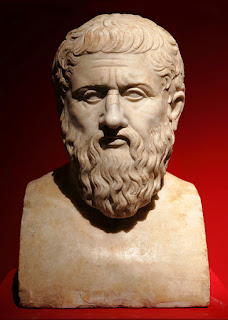 Posted by Cheryl at 10:04 AM No comments: Links to this post

Phillip had a most excellent birthday last week. We started the evening by going out to one of his favorite restaurants, Heaven on Seven. He thought it was just going to be our immediate family, but there were a few surprise guests already seated. The first picture is of some of our dear friends in the area; the second is of a couple who drove all the way from Minnesota to be here for his fiftieth. We love them all so much. 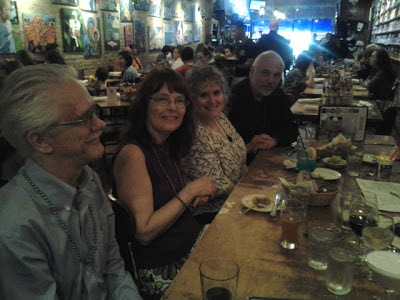 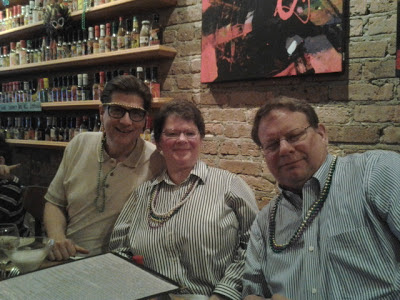 You know these guys. 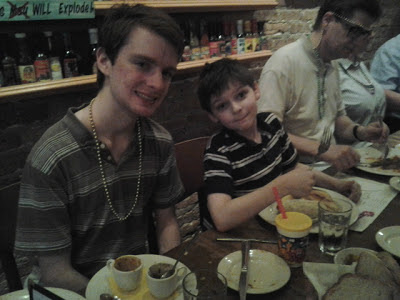 After dinner we went to the home of one of those dear couples above and sat on their deck by the fire while enjoying their lovely view. 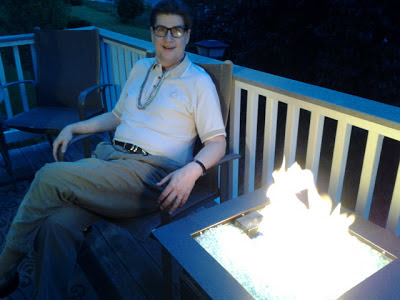 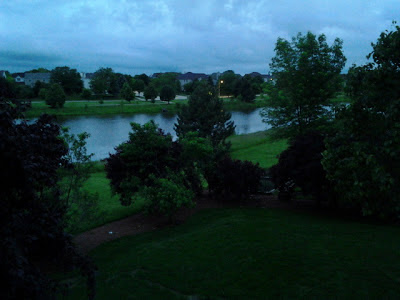 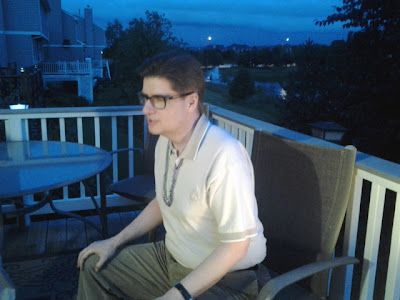 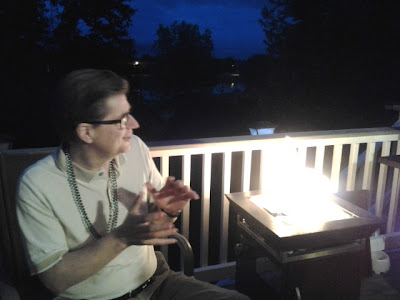 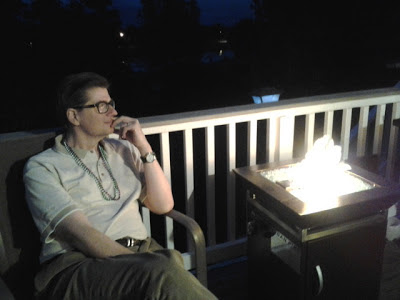 Creole Chocolate Bourbon Cake for the king of our castle! 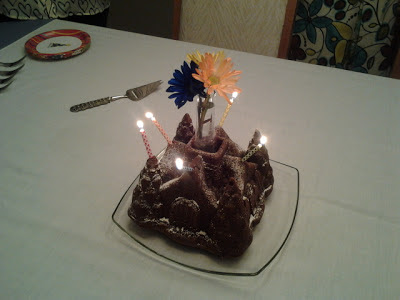 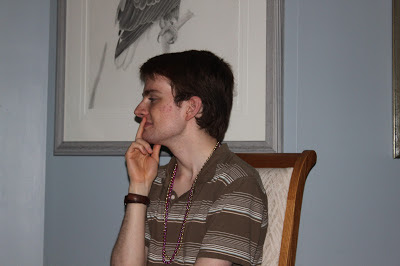 There's a story behind this sequence of pictures. Yep, there is. 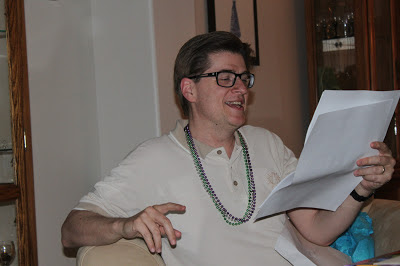 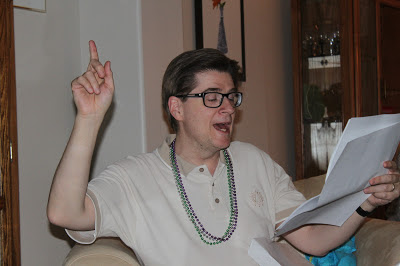 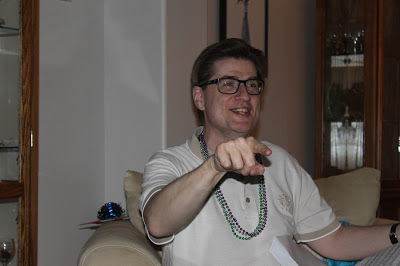 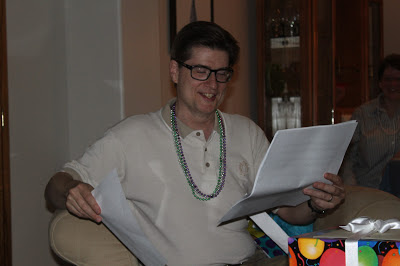 For Evan, the best part--opening presents! 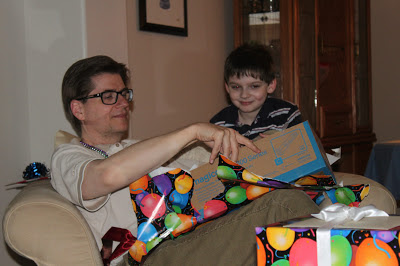 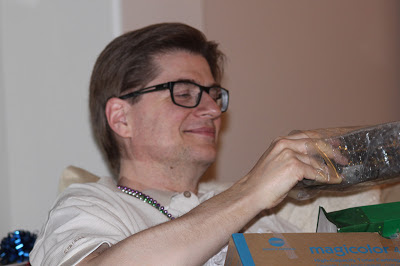 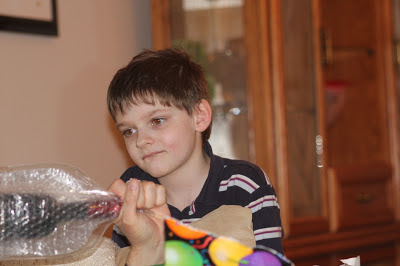 What every cantor wants--a new organ book! (He actually got five.) 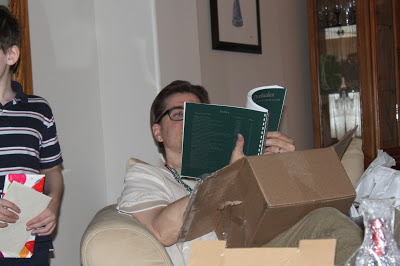 The pages fold out to help with page turns! 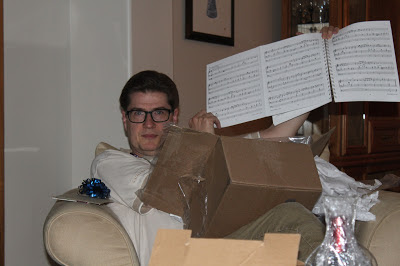 This one is here just because it's so wonderful. 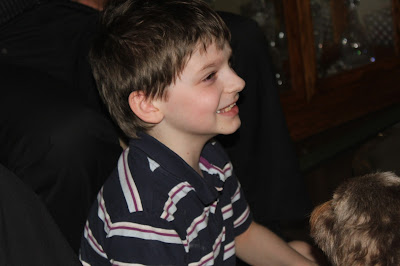 The kids and I prepared a hymn to sing to the one who usually either sings or leads the singing. This time he just got to listen. We sang "How Firm a Foundation" (for my LSB friends, #728). It is one of his favorites and seemed to fit, what with the fiery trials, all-sufficient grace, and gray hairs. :-) Caitlin sang the first stanza, we did harmony on the second, Trevor sang the third, we did canon on the fourth, and our friends joined in on the fifth. In the first picture I am enjoying watching Phillip listen to his daughter. 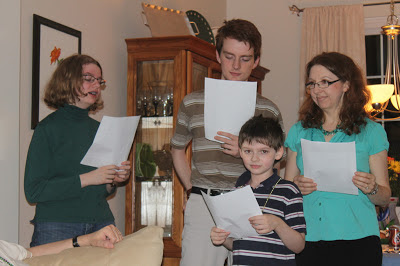 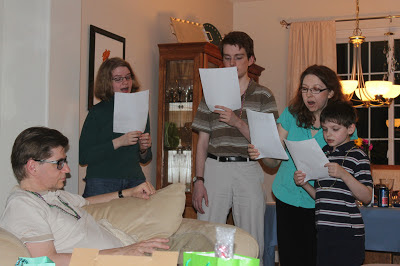 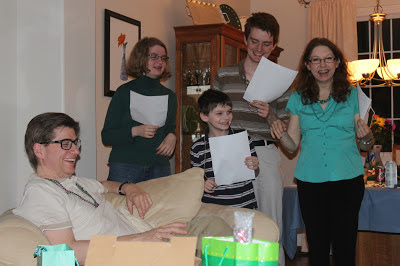 May this year be your best yet, our dearest husband and father. 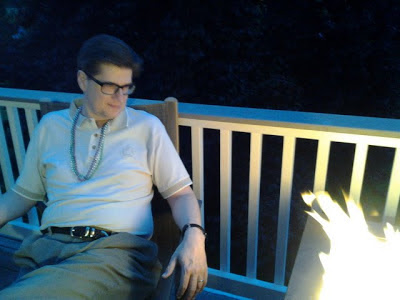 I'm starting to wonder if he's thinking these up ahead of time just to see if we're paying attention.

The scene is dinnertime.

Me: "Just think, one month from now Trevor will be in Italy!"

(To which Trevor responded, rightly enough, that we can't know that for sure. People do live to be 110. Of course, then it was pointed out that what we can know for sure is that 90 years from now I'll be dead. Thank you, dear children. I am so glad those math and biology lessons did not go to waste.)
Posted by Cheryl at 9:16 PM No comments: Links to this post

I'll Take What I Can Get

When his dad is out of town, Evan likes to sleep with me. I'm cherishing these days--there aren't going to be many more of them. Last night, the second night of my husband's absence, Evan came in to the bedroom and announced, "I'm here to take care of you, Mom! You're glad, aren't you? Because that way, if there's a fire, I can help you!" Then he looked deep into my eyes and lovingly affirmed, "I would be willing to get scorched for you, Mom."

Wow. My hero. Of course, in the next breath, his sacrificial love gained some perspective: "But if there were bees, I wouldn't be able to help you. I've never been scorched, so I can do that. But I've been stung by a bee, and I never want to do that again."

Posted by Cheryl at 7:15 AM 2 comments: Links to this post

The Way He Was

"I bet you're going to miss your younger years, Dad."

Ah, yes. Nine-year-old wisdom. But don't worry, honey--you can cherish the memories of those younger years.

Evan: "I don't have a favorite subject. I'm homeschooled."
Posted by Cheryl at 10:43 PM No comments: Links to this post