This post is updated from last year. My mom died a year ago tomorrow.
Posted by Cheryl at 9:15 AM No comments:

Thus It Is Written 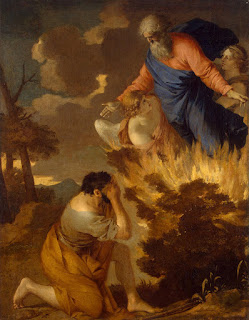 Have you ever wondered why God doesn't talk to us today the way He talked to Noah, Abraham, and Moses? Sometimes it can seem like He's ignoring us. Why is He being silent when we need Him so much? In our family devotion today we imagined what it would be like if we had a burning bush in the back yard that we could consult whenever we needed guidance or encouragement.

But could it be that in not continuing to reveal Himself to us as He did to our forebears in the Bible, and in not revealing Himself to us in new and different ways after revealing Himself to us through His Son, He is protecting us? Can you imagine if God were running around the world today, talking to this person and that person, appearing on top of a skyscraper here and a mountain there? How confusing it would be as we tried to sort it all out. Who really talked to God? Who is just saying he did? Whom should we trust? Whom should we ignore? There are enough false teachers as it is. Can you imagine how many more there would be claiming direct revelation if God had the habit of dropping in on people today?

I have sometimes felt like maybe the Deists had the right idea--that God the watchmaker designed and wound up the world but is just now watching and waiting while it runs itself down. Why is He so silent? Doesn't He care?

Yes. He cares. And certainly God can do what He wants and at any moment He could decide to show up in your living room or mine and engage us in conversation. But what more can He say than He's already said? What more do we need Him to say? In today's Treasury of Daily Prayer, there is this comfort from Martin Chemnitz:

"At one time God revealed His Word by various ways and means. For sometimes, appearing Himself to the holy fathers, He spoke in their presence, sometimes through prophets inspired and moved by His Spirit; finally He spoke to mankind through His Son and the apostles. . . . But He gave us neither command nor promise to expect that kind of inspirations or revelations. Yet for the sake of posterity He saw to it that this Word of His, first revealed by preaching and confirmed by subsequent miracles, was later put into writing by faithful witnesses. And to that very same Word, comprehended in the prophetic and apostolic writings, He bound His church, so that whenever we want to know or show that a teaching is God's Word, this should be our axiom: Thus it is written; thus Scripture speaks and testifies."

We don't need our own personal burning bush. We already have one in a God who has fully revealed Himself to us through His Son, and who continues to do so today. In His Word and Sacrament we need not wonder if it's really God coming to us or someone just pretending to speak for God. We need not try to sift through all the noise to locate the truth. Instead, we can rest in the security of what God has already promised and not worry that He's ever going to change, add to, or subtract from that promise. In a world in which information is the new currency and there are many and varied voices continually coming at us from all directions, our God is "silent" not because He doesn't care about us, but because He does.
Posted by Cheryl at 1:01 PM No comments:

Email ThisBlogThis!Share to TwitterShare to FacebookShare to Pinterest
Labels: Bible

A little over two weeks from now, February 22, will be the one-year anniversary of my mom's death. A few weeks ago her burial marker was finally placed. 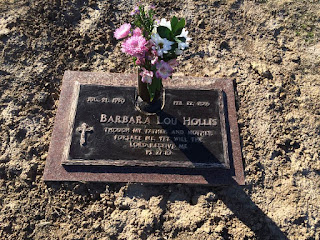 The schedule is very full right now, and my plan was to go see the marker on February 22, as my mom is buried over a half hour away from our house. But Monday of this week was lovely weather-wise as well as being my husband's day off, and he offered to drive me to the cemetery. As soon as we got there I smacked my head. Should have brought flowers for the vase! We drove to a nearby grocery store to buy a bunch.

Having been recently laid, the marker was dirty with disturbed earth. We rubbed it off as best we could. Mom was buried in a section of the cemetery where only flat markers of a certain size are allowed, so between that and available funds I was somewhat limited in my options. But I am pleased with how it came out. I have previously written about the background of the verse. I decided to use the translation from my mom's Bible (the Saint Joseph edition of the New American Bible).

Another item that may be approaching closure is a small decorative chalkboard in our kitchen. On the night my mom died, Evan wrote this message on it: 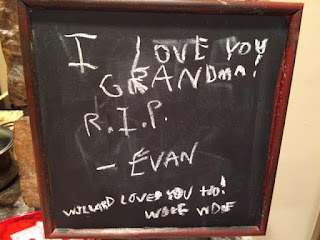 The message is still there. We decided to leave it for Evan to erase, and he has not done so yet. But it feels like we need to close this chapter, too, and we are thinking February 22 is a logical date to do it. The thing is, while Evan may be ready, I wonder if I am?

Pfalzgraff Pistoulet accessories - The Secrets of Pistoulet book, assorted serving pieces on Replacements or Ebay. Also, rooster items still work, as do sunflowers. :-)
New set of French white Corning Ware like this (all glass lids), not this or this (white knobs).
New wine glasses. These are kind of neat. They have different designs so you can tell them apart. They also have them for red wine.
Books - paperback (or Kindle gift card?)
Stephen King, On Writing
A Thousand Splendid Suns
I Want to Live These Days With You
Hannah Coulter
Evening in the Palace of Reason
All the Light We Cannot See
Simple Steps to Foot Pain Relief
Could use more Bath & Body lotion but they don't have my fragrances anymore. Used to like Sun-Ripened Raspberry, Tangerine Spice and Coconut-Lime Verbena. They now have a "Raspberry Tangerine" some other Coconut options. Maybe one of those would be a good substitute.
Set of Zwilling J.A. Henckels knives--kitchen AND steak--in a knife block. They need to be Zwilling, not just Henckels, or they aren't authentic/top quality. Read.
Noritake Virtue – candlesticks, covered casserole