To begin, let's talk about poetry. What is it? What makes a poem? (Possible answers: intensity and economy of expression, strong appeal to senses, figurative language, rhyme, rhythm, division into lines and stanzas, meant to be read aloud.) 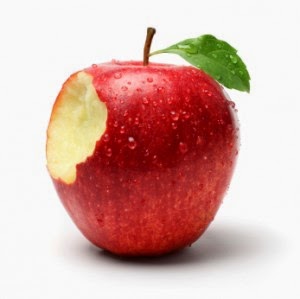 Even if you don't read a lot of poetry, you encounter poetry all the time in real life. Can you think of some places that we often see or hear poems? (Possible answers: Bible, hymns, songs on the radio or television, greeting cards.)

Let's read a poem about poetry.

Don't be polite.
Bite in.
Pick it up with your fingers and lick the juice that
may run down your chin.
It is ready and ripe now, whenever you are.You do not need a knife or fork or spoon
or plate or napkin or tablecloth.
For there is no core
or stem
or rind
or pit
or seed
or skin
to throw away.


Is this what you usually think of when you think of poetry? Why or why not? (Answer may be no since there is no rhyme or meter.) What makes this a poem? (Possible answers: it is written in lines rather than paragraph form. It creates a picture in your head. It makes a vivid comparison.)
What is the comparison in this poem? (A poem is compared to a piece of fruit.) According to the poet, how is a poem like a piece of fruit? (You have to "bite" into it with enthusiasm. It is juicy and flavorful.) How is it different? (There is nothing to throw away.) Do you like this poem? Why or why not?

As we continue through our month of poetry, be thinking about what you think makes a good poem. Look for poetry in everyday life. Keep a journal for the month where you write down any thoughts you have about poetry, poems you like, and poems you write. Have fun!
Posted by Cheryl at 11:36 AM 2 comments: Links to this post

April is National Poetry Month! Thus far I have not done much formal poetry study with my last remaining homeschool student, so now seems as good a time as any to rectify that situation. To that end, we will be observing National Poetry Month here at the Philipp Nicolai Lutheran Academy by doing something poetry-related every weekday during the month of April. My plan is to post each day's activity here for anyone who would like to join in. You are also invited to share your own ideas or report on what you are doing (or have done in the past) in your own home school. I do not intend for this to become a stressful or burdensome process, so the activities will be short, sweet, and--I hope--fun. They will be designed for elementary level children who are not terribly excited about poetry because that is what I have in my house. :-)

I will try to post each day's activity the night before, which means the first post will be tomorrow, March 31. Hope to see you back here then!
Posted by Cheryl at 6:20 PM 2 comments: Links to this post

Wow, a month without a post. I don't know if I have ever gone this long. I have been pondering the reasons, and I think there are several. First, I am writing more places these days! Here are a few of my recent posts elsewhere. I am quite pleased with this development, but also regret that it seems to be making it harder to write on my own blog. Time to write is a precious commodity these days, and I must admit that the larger the potential audience for a piece, the higher its priority on my task list. But I also find myself wondering if maybe this blog is moving into the autumn of its life. Everything has its season, and I don't know if Round Unvarnish'd is still going to be telling tales when I'm in my eighties. But who knows? Maybe some day it will no longer be "A Round Unvarnish'd Tale" but "A Much Rounder, Unvarnish'd, Peeling, Cracked and Weathered Tale."

So, I guess an update is in order. Several weeks ago we enjoyed spring break with Caitlin. Now she is back at school and Trevor is home. Ah, that we could have them both at the same time. But I guess this way, the joy is spread out over a longer period. This past week we went to see Trevor play for the last time with the UNL Symphony. He won the undergraduate concerto competition for strings/piano two years ago when he was a sophomore and again this year as a senior (winning his sophomore year made him ineligible to compete his junior year). Here is a video of his performance on the winners' concert:

Our pastor had a stroke. He is only in his mid-forties. Thanks be to God, it was a minor stroke, brought on by things that can be better treated and managed. His family--wife and four sons kindergarten and under--and his congregation are praying many prayers of thanks that he was preserved in life, is recovering well, and will in time be able to return to his call as a shepherd of souls. What a gift is life, always.

In two weeks Evan will take his First Communion at Easter Vigil. I only wish his big sister and brother could be here for the occasion.

Under the heading of "what I've been thinking about," I happened across a video of Monica Lewinsky giving a TED talk on what it's like to be publicly humiliated. It was quite compelling and made me think of the OU student who was videotaped singing a terrible and racist song on a bus. Here's an article expressing the hope that that young man's entire life is ruined because that is what he deserves. I am troubled by the thought that we live in an age where someone can do something admittedly cruel and stupid but even after repenting and apologizing and trying to learn from the mistake be never, ever able to put it behind him (or her) because of how thoroughly documented and public our lives have become. I am not thinking now of Parker Rice--I can't speak to his character or the sincerity of his apology--but of people in general and the problems posed by the permanence of the internet. Even those of us who are not public figures (and so have not sinned in such visible ways) can probably relate to the admonition that "the internet is forever." Most people have posts they wish they hadn't written, comments they wish they hadn't made, pictures they wish they hadn't shared--and how much more dangerous is the terrain for young people who are still in the phase of life where they tend to think they are invulnerable. I am reminded of that picture often shared on Facebook expressing gratitude for having come of age before social media. Oh, to be able to take back that word, that tweet, that . . . whatever. And yet, more often than not, we can't. Because even when the world with its short attention span has moved on and forgotten, and the "sinner" is redeemed and going on talk shows and writing books, there is still the knowledge that the offensive thing remains intact, floating in the cloud, retrievable at any time.

It is a knowledge that makes the forgiveness of sins and the forgetfulness of God all that more astounding.


Posted by Cheryl at 5:19 PM No comments: Links to this post