The Peace that Passes Understanding

There was much comfort to be had in this morning's service. One of our amazingly gifted musicians sang an exquisite setting of Psalm 121 by Lee Dengler.


Later for the Voluntary she sang my husband's arrangement of LSB 846.

"Your Hand, O Lord, in Days of Old" (Lutheran Service Book 846) from Cheryl on Vimeo.

I could hardly get through one phrase of "Gracious God, You Send Great Blessings" during communion. I was reminded whence our joy comes by the closing hymn, "In Thee is Gladness."

And in Mark's Gospel, there was this: "Do not fear, only believe."

Amen.
Posted by Cheryl at 12:50 PM No comments: Links to this post

Five weeks ago today our son graduated with honors from University of Nebraska in Lincoln. He now holds a Bachelor of Music in Piano Performance and has been accepted into the Master's program at Texas Christian University.

I was not able to attend Trevor's graduation ceremony due to the need to retrieve his sister, who concluded her freshman year of college in another state the same weekend. But my husband attended and of course took along the camera so as to provide a pictorial record of this momentous event!


Awaiting the entrance of the graduates 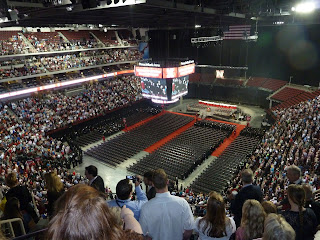 I think that is Trevor walking behind his departmental banner. 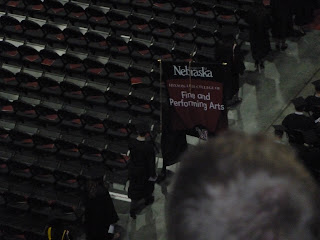 I think Trevor is third row from the bottom, fourth student from left. 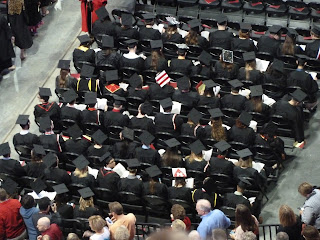 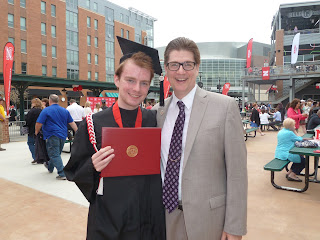 In front of the music building. 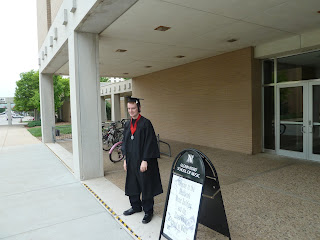 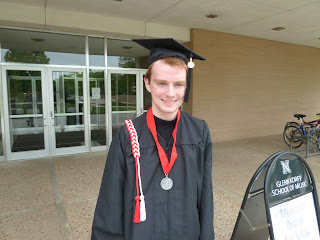 Outside his piano teacher's office for the last time. 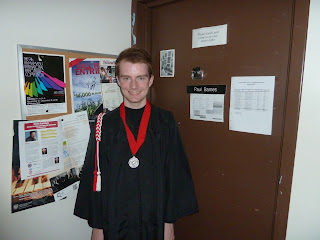 In August of 2011 we dropped a high school graduate off in Lincoln to begin a four-year program in music. This was our last view of him as he walked into his dorm before we left to drive back to Illinois. For about five minutes after this picture was taken we sat in the car while my husband tried to help me stop sobbing uncontrollably before we drove away. 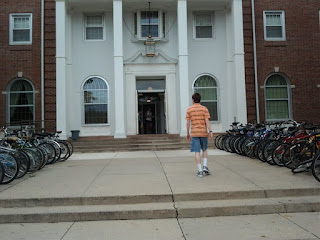 Fast forward to four years later. Different dorm, same Trevor. In some ways he hasn't changed all that much. He is still my son. He is still frighteningly smart, incredibly talented, and blessed with admirable integrity and strength of faith. But this is not the same guy in the picture above. Below you see not a fresh high school graduate but a young man of 22 about to embark on the next phase of his studies and his life. In a few months we'll take a picture of him in his new apartment on the campus of TCU. I daresay the shirt will be purple instead of red. And I daresay I'll have another good cry before we drive away. 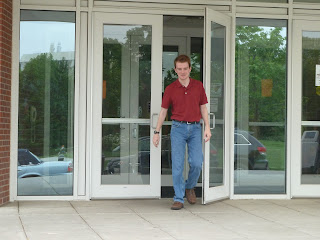 Posted by Cheryl at 4:19 PM No comments: Links to this post

Time for a "here's what we've been up to" post.

Hubby is on the road this week, doing some teaching and playing in South Dakota. I always look at these times as an opportunity to focus on neglected tasks. I can let the bedroom get even messier than usual while I create stacks and move them around. Time will tell if all that creating and moving leads to anything worthwhile.

Both of the college kids are earning bucks this summer. Caitlin is babysitting about 30 hours per week and Trevor is teaching with me at Sylvan and also doing some sub organ playing. They are both making great strides in their driving and hoping to get their licenses by summer's end. Yes, by today's standards they are old for getting drivers' licenses. It just hasn't been a priority for us, and with the craziness of life the past few years it was one of the things that got pushed aside. To kickstart the process we hired a driving instructor for some behind-the-wheel practice and now are just letting them drive as much as possible as we go hither and yon. I am getting to the point that I don't feel compelled to be a second set of eyes for them every second of every trip. Progress!

Evan has been taking swimming since early May and is also making great progress. He is counting the days until he goes to Lutheran summer camp next week. I have still not quite figured out how my Highly Sensitive Child who is deathly afraid of bugs and hates to be in wet or dirty clothes does so well at summer camp, but he does. He would go for more than one week per summer if we could afford it. This time he is going with one of his best friends from church, so he is even more excited as it is his friend's first time at camp, allowing him to be the experienced camper. I am so thankful for this opportunity for him.

Allergies have been horrible, just horrible, with symptoms of such severity that they make me feel ill. It was bad this time last year, too. I am loading up on OTC medications and hunkering down until it passes. For many years in Illinois I was on allergy shots but quit them when we moved. I may have to revisit immunotherapy but right now don't want to invest the time or money.

I finished my re-read of Pride and Prejudice. I liked it better this time around, but I am still not a huge Jane Austen fan. I will not be going on to another any time soon.

I am finding it difficult to reset my shopping and laundry habits for the increased numbers in the house. Probably about the time I succeed in doing so, they will leave. Sigh. The summer is going by too quickly.
Posted by Cheryl at 10:38 AM No comments: Links to this post

It's Really Not That Hard

My friends wrote a book about female vocation. You should buy it and read it. The purpose of the book is to ponder what it means to be a Christian woman, living under the Cross, in these gray and latter days. Beyond that, there is no one kind of woman to which the book is addressed. It is for single women, married women, young women, old women, mothers and those who are not, sisters, widows, and any other kind of woman you can think of who looks to Jesus and Him Crucified for purpose in her daily life.

I am confounded, then, how negatively the book has been received by a few (a very few). The tone of the book has been attacked as being angry and resentful (nothing could be further from the truth). It has been implied that the authors are hypocrites because here they are doing something (writing a book, or editing, or teaching online classes) beyond what they see as their primary vocations of wives and mothers. (Quick aside: as the authors define it, vocation is something that God gives you to do that you can't quit doing (at least, you can't quit without its being a sin). So writing is not a vocation. Music is not a vocation. Such things are hobbies, jobs, interests, and aptitudes. But the callings of wife, mother, daughter, sister, and neighbor--these are vocations. They are the stations in life into which God has placed us and from which we are called to serve.)

Okay, I guess that wasn't a quick aside. Back to the point of the post. There are those who seem to think that because LadyLike suggests that service to the people God has placed in one's life should come ahead of other stuff that they are therefore saying there is something wrong with, or no place for, the other stuff. That is not what they're saying. They are actually not saying anything different for female vocation than they are for male vocation. Whether we are male or female, our most important calling, after that of baptized child of God, is to serve our neighbor. When it gets to the specifics of how men and women do that, yes, there are differences because men and women are different (does this really need to be said?). But for both men and women, vocation is about service to others. Those in our immediate family are the ones we are called to serve first. From there the circle of service can expand to church, neighborhood, town, country and world. So if there's time after the family has been taken care of, then by all means, write a book, learn a Beethoven sonata, teach a class, volunteer at the library, draw a picture, engage in politics, or do some work for money. But don't let those things take precedence over serving the people you love, the ones God has placed before you in the life He has given you. How you work that out, on your own if you're single or with your husband if you're married, is a matter of Christian freedom.

Seems pretty simple to me. There is no conflict here, no contradiction, no hypocrisy. Why some people have such a hard time with it and insist on setting up what in Logic 101 is known as a false dilemma is a mystery to me.

LadyLike was the Issues, Etc. Book of the Month in May, and the authors spent some time talking to Todd Wilken, the host of Issues, about their book. Yesterday was their last appearance, and listeners were invited to submit questions, which I did. Here is the question I asked:

How do you respond to those who say you are being hypocritical by promoting a traditional view of womanhood (one that says a woman's highest calling is to care for her family) when you are taking time from your family to write a book, go on a book tour, and give radio interviews?

There wasn't a lot of time to answer on the program, so Rebekah wrote a blog post yesterday that provided a more detailed answer. If you would like to read it, go to the LadyLike blog. And stay tuned for information about how you might be able to win the LadyLike book I won for asking what was determined to be one of the three best questions on yesterday's show. (I already have a copy, and as great as it is, I think one is enough and so desire to share the love.)