Today was Evan's last official day to sing in the children's choir. His voice is changing. He still has soprano notes, although not as high as in the past, but he is developing his lower range and struggling with his mid-range. He will continue attending Schola Cantorum rehearsals through the end of the year, helping out our novice program (welcoming new young singers), but we have told him he doesn't have to sing with the choir any more after today. Seeing as how I don't have anyone waiting in the wings to take his place, it would seem my choir mom days are over (sigh).

Here are a couple of pics, serious and silly, of our group today. We sure do love them. 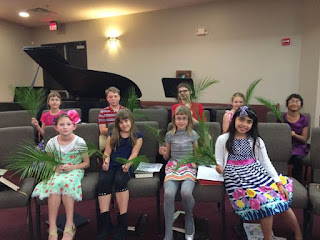 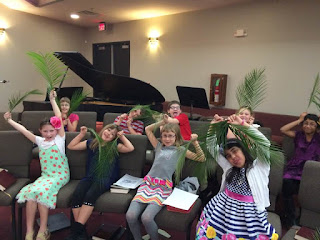 We were hoping one of the above pictured choristers would agree to sing the solo stanza of "A Lamb Goes Uncomplaining Forth" at the Good Friday service, but there have been no takers. Today when I told Evan that it is looking like his dad or I might have to do it, he was quite alarmed. But it's supposed to be a child's voice! Yes, son, I know. Evan is thinking he might just have to step up to the plate one more time.

In other news, we had some hail the other day. 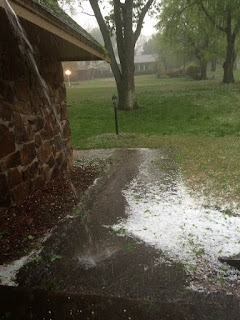 The storm chasers were around the very next day leaving flyers on doorknobs.

College kids will not be home for Easter. Silly academic calendars. But four weeks from today I will drive to Missouri to pick up Caitlin, and a few days after that we'll all go to Fort Worth to see Trevor receive his Master's degree in music! Speaking of Trevor, he has accepted an invitation to pursue his Doctor of Musical Arts at the University of Iowa. He is receiving a full tuition scholarship plus a teaching and accompanying stipend. We are very, very happy!

This past week I wrote an article on the Benedict Option which got a little traction. Then yesterday I posted something seemingly unrelated on Facebook. And yet as I think more about the previous link, which is about the shortage of organists in the Church, I am starting to connect it to the Benedict Option. The basic idea of the Benedict Option is that many who would claim the name "Christian" are losing touch with what that actually means. In other words, we call ourselves Christian, but we aren't living and worshiping so as to preserve and pass on the faith to future generations. While the Church in other parts of the world is growing, here in America (and other parts of the Western world) it is shrinking. The Benedict Option calls for Christians to see the gravity of this situation and take steps to turn it around. Author Rod Dreher argues that before we can share our Christian faith with others, we need to reclaim it for ourselves.

So how does that connect to an article about the shortage of organists? As I think about my own church body, which is often called the singing church because of the emphasis it puts on music, it seems to me that we are in many quarters losing touch with that part of our identity. After I posted the above article on Facebook there was much discussion about the difficulty of finding musicians, paying for musicians, and supporting congregational song. Many churches are giving up and going to recorded tracks. This is a terrible, terrible development. The more we rely on such measures the more likely it is that there will be even fewer church musicians in the future.

I am starting to think that, while it's great that we send missionaries to foreign lands (and my husband is one who goes), we might need to give some thought to what we can do to shore up our own churches and our own worship. It doesn't appear to me that we are doing what needs to be done to preserve our musical and liturgical heritage. It's not something that is just magically going to survive because we want it to. In the same way we need to be intentional about living out our Christian faith, we need to be intentional about passing on the gift of music and liturgy. There is so much more we could be doing, and it deeply frustrates me how as a church body we give lip service to it but don't really do anything about it.

Enough of that for now. The hour has come. A blessed Holy Week to you and yours.


Palm Sunday Verse/Hymn of the Day from Cheryl on Vimeo.
Posted by Cheryl at 4:06 PM 6 comments: Links to this post

Hymn of the Day for Fifth Sunday in Lent

"My Song Is Love Unknown" - Lutheran Service Book 430 from Cheryl on Vimeo.
Posted by Cheryl at 3:46 PM No comments: Links to this post