The End of an Era

Today we start the process of saying farewell to our aging solarium. We grieve its passing not at all. It has been a source of nothing but grief for the almost eleven (!) years we have lived in this house.

Our house is about 30 years old. The sunroom was added by the previous owners about 15 years ago. When we first bought the house the sunroom still held some charm. The previous owners had also installed a hot tub, and for the first few years of living here we did enjoy saying words we never expected to say: "Do you want to go out to the sunroom and sit in the hot tub?" But in time the hot tub lost its appeal--my husband is sensitive to the chemicals and I was not motivated to maintain it for solo soaking--and shortly after we moved in we also discovered that the sunroom leaked. (Do you have any idea how slippery ceramic tile becomes when water is sitting on top of it?) The leaking was minimal at that time but has only grown worse over the years (you can can read more about that here) and now has started to compromise the part of the house to which the sunroom is attached. It was time for the whole mess to go (the hot tub quit working--and we got over our infatuation with it--years ago).

Here are a few exterior shots of the sunroom and deck taken last month: 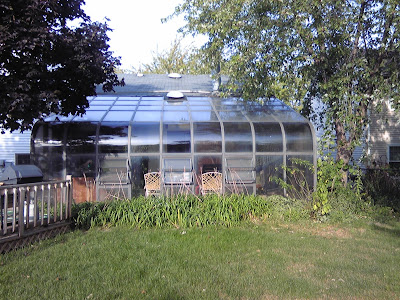 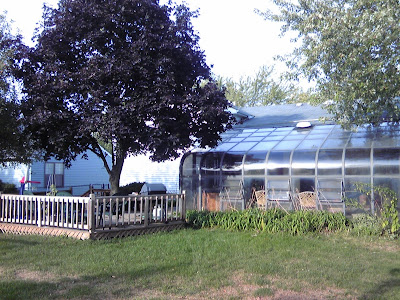 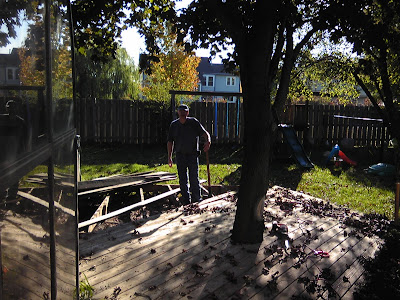 The bunnies under the deck have driven Shiloh (our dog) crazy for years. Today is her day! Of course, the bunnies have made for the hills. But she's gonna make sure there are no stragglers. 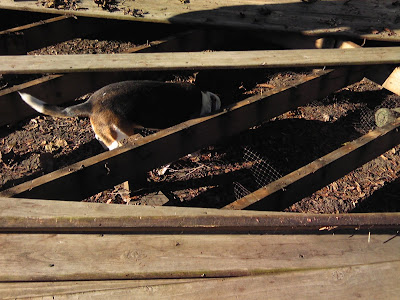 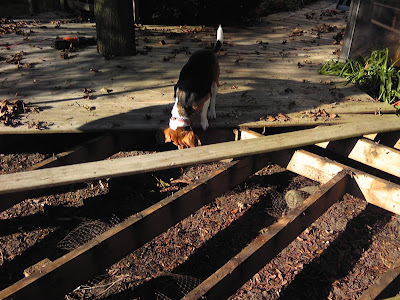 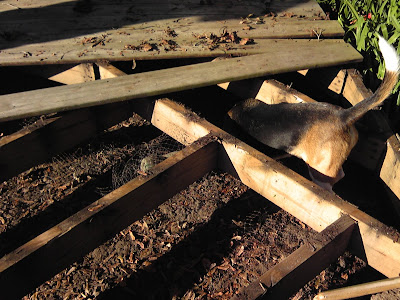 I plan to continue taking pictures as the process unfolds, so if you're into this sort of thing, keep checking back!
Posted by Cheryl at 9:08 AM

Email ThisBlogThis!Share to TwitterShare to FacebookShare to Pinterest
Labels: House and Home

Oh, I'm into it. Keep posting as you are able!

I wonder... I just wonder how the ground is sloped under that deck. Will the removal of the deck and solarium reveal hidden knowledge?

I don't know about hidden knowledge, but the removal of the majority of the deck today revealed not bunnies but an opossum. Said opossum now has less tail than he did at the beginning of the day.